Power consumptionInductances (conductor coils) and capacitances (capacitors) in electronic circuits influence the time course of the electrical charge transport - the current I - in the circuit when an electrical voltage U is applied. Capacitors are charge storage devices and have a charging current which comes to a standstill at a constant voltage when the capacitor is fully charged. 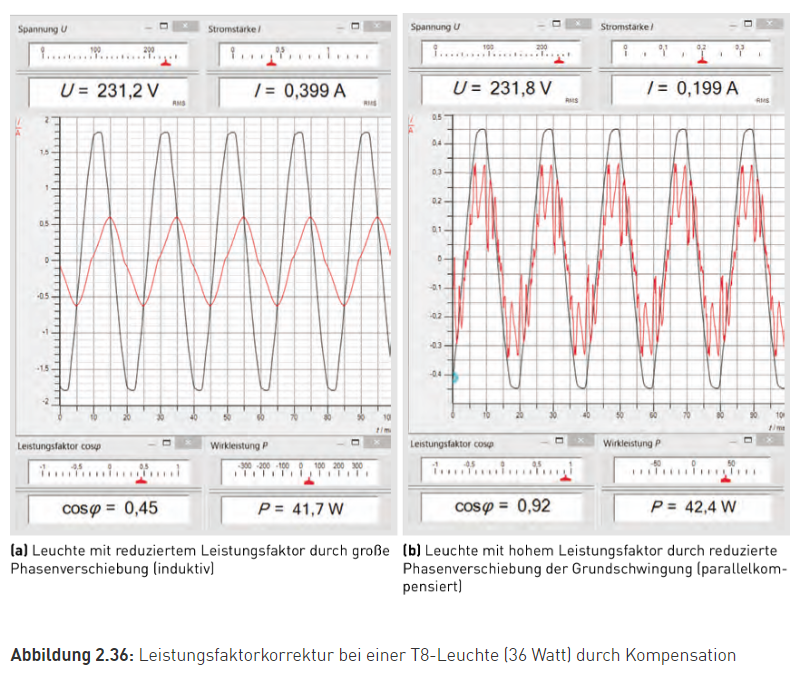 The power consumption of the electronic circuit at any time is P(t) = U(t) x I(t). Integrating current I(t) and voltage U(t) over a period of time results in the so-called active power PWirk as time average value of P(t) to PWirk = U x I x cosφ with U and I as time average values of voltage and current2 (nominal voltage and nominal current). The factor cosφ is often referred to as the power factor by the Greek letter λ3.

Due to the opposite directions of the phase shifts of coils and capacitors, it is possible to design circuits in such a way that the occurring phase shifts cancel each other out, thus avoiding the occurrence of reactive power.

IGesamt = IWirk + IBlind In particular, the total current IGesamt must be taken as a basis when dimensioning the electrical system (line cross-sections and circuit breakers).

TRILUX luminaires basically have a power factor ≥ 0, 9, even if their connected load - which is often the case due to the introduction of LEDs - the connected load of the luminaire is less than 25 watts.

Luminaires with dimmable electronic control gear often have a much lower power factor than 0.9 in dimmed or standby mode. This is permissible. However, this must be taken into account metrologically when measuring the power consumption in dimmed operation or standby power.